If you are a follower of Jesus, I’m sure you know that 2017 marked the 500 year anniversary of the Reformation. On October 31, 1517, Martin Luther nailed his 95 Thesis on the Castle Church door in Wittenberg, Germany writing against the vile practice of indulgences in the Roman Catholic church. This began a long process of gradual reformation leading to a church split between the Catholic church and Protestant church.

Four years following this historic date, on January 3, 1521, Martin Luther again made a resilient statement at the Diet of Worms where he was forced to recant his accusations and instead responded, “Here I stand. I cannot do otherwise.”

These two events, rightfully so, have been celebrated for half a millennia as events that changed the course of history, reoriented the church to the gospel of Jesus, and set the church in a direction toward a more faithful and critical study of Scripture.

But this year, through the celebrating the Reformation and today reflecting upon Luther’s profound statement to the papacy, I find myself torn between joy and sorrow.

In November, I had the chance to visit Germany on a mini-Reformation tour, see several sites where historic Reformation events took place, and walk the steps Martin Luther would have taken to post the 95 Thesis on the Castle Church door in Wittenberg. It was a remarkable trip. I found myself mesmerized and built up in my faith as I looked back with joy and gratitude on Martin Luther’s detailed study of Scripture which led to the remarkable reformation.

But I also found myself mourning. Amidst the celebration of this event sits the sad reality that the Reformation caused the church, which Christ prayed to be unified, to split. And in the 500 years since the Reformation, this division has never been rectified. 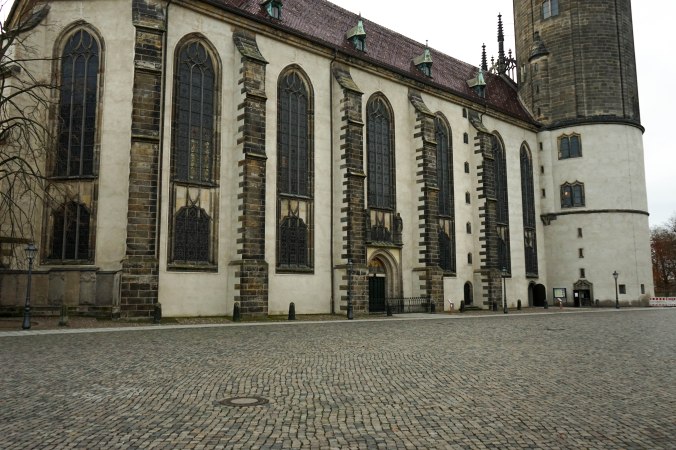 As I left for Germany, I began reading Eric Metaxes’ Luther biography. A point I found quite interesting in Luther’s life is that one year after the 95 Thesis were issued, Luther still hoped the Catholic church would come to an understanding of his petitions and would come into agreement with him. Martin Luther did not desire to separate himself from the Catholic church. What we often view as a declaration of independence–Luther’s 95 Thesis–was really an attempt to start a dialogue, not a debate, and bring about new direction, not division.

Amidst the joy and sorrow of the Reformation, I want to highlight one beautiful aspect of Martin Luther’s life and ministry I have been edified and challenged by. Luther went above and beyond traditional education to study Scripture fervently for himself.

We rightly rejoice in Luther’s re-discovery of salvation by grace alone through faith alone in Christ alone. These and other important truths helped re-orient the Church in a beautiful and needed way. But these did not come simply by attending church and seminary. It was his out-of-class study of Scripture and church history which awakened him to the errors in the Catholic church.

I think we often find ourselves in the same place as the Catholic church 500 years ago. We think we’ve arrived at an ultimate understanding of God, Scripture, and the Christian life. “It took a long time, but thanks be to Martin Luther, the Reformers, and my denomination today, we finally got our theological ducks in a row!” we tend to think; though we may never voice it.

I saw this image once which caused me to laugh and cringe at the same time. I think we often behave like the teacher of this church membership class–as if after two thousand years of church history, we finally reached the place where we have it all right.

But this is the issue Martin Luther was seeking to reform–ecclesial narcissism–the idea one sect of Christianity has it all right and is not in need of the others. This thinking is utterly mistaken and misses the beauty of the church’s diversity.

I do believe some traditions and sects of Christianity have a truer devotion to Scripture and better understanding than others, but let us never discount the need for inter-denominational dialogue and learning from Christians of other backgrounds.

I am a Protestant, but the Eastern Orthodox church and the Roman Catholic church has taught me much about the beauty of Christianity seen in art, iconography, and liturgy. I have been edified in Catholic art and challenged in the deep appreciation for saints of the faith in both the Orthodox and Catholic church.

Similarly, I did not grow up in a Pentecostal church, but I have been blessed and edified by the Charismatic tradition and seen my theology and appreciation for the Holy Spirit grow as a result of it.

This year, as we reflect on the beauty, and sorrow, of the Reformation, let us commit to not remaining stagnant or ignorant. Let us continually, like Martin Luther, keep a steady eye on Scripture to test if we are in the faith, and seek to remember the unity of Christ’s church and glean from those who might have differing beliefs than us within His body.

As the passing of the Reformation celebration has taken place, let us still reflect upon the beauty and sorrow of the Reformation. Let us hold to our convictions like Martin Luther but never reach a spiritual narcissism which disables our learning from other Christian backgrounds. May we remember Martin Luther, the man with a reforming life which changed history. And may we have constant hearts of conscious study of Scripture that will keep the church alive and awaken those who have fallen asleep. To the glory of God and the furtherance of His Kingdom.